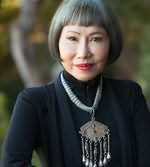 (b.1952)
Amy Tan is the author of four critically acclaimed, internationally bestselling novels. Her first novel, The Joy Luck Club, was nominated for the National Book Award and the National Book Critics Circle Award and was a recipient of the Commonwealth Gold Award. The Joy Luck Club was also adapted into a feature film in 1994. Her subsequent novels are The Kitchen God's Wife, The Hundred Secret Senses, and The Bonesetter's Daughter. She lives in San Francisco and New York.

Red Sorghum (1991)
Mo Yan
"Mo Yan deserves a place in world literature. His voice will find its way into the heart of the reader, just as Kundera and Garcia Marquez have."

The Last Time I Saw Mother (1996)
Arlene J Chai
"A remarkable first novel filled with family secrets and the intersection of personal and world histories, told through four mesmerizing voices."

The Mistress of Spices (1997)
Chitra Banerjee Divakaruni
"A dazzling tale of misbegotten dreams and desires, woven with poetry and storyteller magic."

Protect and Defend (2000)
(Kerry Kilcannon, book 2)
Richard North Patterson
"An important novel on passion and politics... appeals to both the intellect and the heart."

Daughter's Keeper (2003)
Ayelet Waldman
"A powerhouse novel of complex emotions... so compelling that when I finished the book, I started over again."

The Namesake (2003)
Jhumpa Lahiri
"The kind of writer who makes you want to grab the next person and say 'Read this!'"

War Trash (2004)
Ha Jin
"I am enthralled by Ha Jin's work: he always presents moral conundrums within historical contexts; the frayed edges of humanity; the ways in which both the tenacious and hopeless survive. He is one of our most gifted and essential writers."

Unpolished Gem (2006)
Alice Pung
"Alice Pung is a gem. Her voice is the real thing."

Love and War in California (2007)
Oakley Hall
"This is a book for our times, a book that will surely stand out as an enduring masterpiece of American literature."

Under Fishbone Clouds (2009)
Sam Meekings
"A powerful and mesmerizing novel, both mythic and intimate... a great accomplishment of imagination, insight, and lyricism."

I Almost Forgot About You (2016)
Terry McMillan
"Terry McMillan's novels have always been about telling the uncensored truth about friends, family, lovers, and oneself. Through addictively revealing conversations - including an instructive one about the sexual prowess of men who made the A list - McMillan's narrator is the ideal running commentator on what smart women do to reach the pinnacle of success and what they must do to get the hell out before it's too late. It's a story about both reinvention and acceptance, told in McMillan's quintessential voice, now even more expansive, prismatically perceptive, and laugh-aloud generous in how we talk about love and all its wonders."