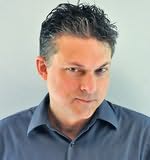 Bill Beverly grew up in Kalamazoo, Michigan, and studied at Oberlin College and the University of Florida. His research on criminal fugitives and the stories surrounding them became the book On the Lam: Narratives of Flight in J. Edgar Hoover's America. He teaches American literature and writing at Trinity University in Washington, DC.

Gangster Nation (2017)
(Gangsterland, book 2)
Tod Goldberg
"Gangster Nation punches even harder than the excellent Gangsterland did: against the backdrop of 9/11, everybody's roughed up and bleeding, and nobody's hiding it well. Tod Goldberg's weird world is getting The Sopranos-good, and The Sopranos-funny: he can hit you high, low, or straight in the gut. Meshugener wiseguys. It'll make you a better killer--and a better rabbi."