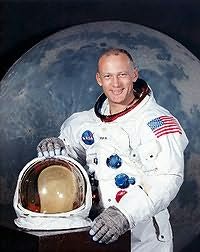 (b.1930)
Buzz Aldrin is an American mechanical engineer, retired United States Air Force pilot and astronaut who was the Lunar Module pilot on Apollo 11, the first manned lunar landing in history. On July 20, 1969, he was the second person to set foot on the Moon, following mission commander Neil Armstrong.
Novels
Encounter with Tiber (1996) (with John Barnes)
The Return (2000) (with John Barnes)

First Landing (2001)
Robert Zubrin
"Zubrin shows how a flight to Mars has progressed from fantasy to...a reality that can be achieved by us. Zubrin is showing us the way."