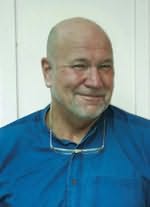 aka Carl Ramm, Randy Striker
Randy Wayne White, a former fly-fishing guide whose "Out There" column ran for many years in Outside magazine, currently writes a monthly column for Men's Health magazine. Among the many books he's written are The Sharks of Lake Nicaragua, Batfishing in the Rainforest, Last Flight Out, and the "Doc Ford" mystery series. His novel Sanibel Flats was chosen as one of the 100 Best Mysteries of the 20th Century by the Independent Mystery Booksellers Association. White is the winner of the Conch Republic Prize for Literature and the John D MacDonald Award for Excellence in Florida Fiction. He also served on the Florida Judicial Nominating Commission for four years, and currently serves on the Florida Bar Association Grievance Committee. He lives on Pine Island, on Florida's southwest coast.

Sun, Sand, Murder (2016)
(Teddy Creque Mystery, book 1)
John Keyse-Walker
"A winner. It is written with the coral clarity of a Caribbean atoll, and evokes an edgy rhythm that suits the protagonist, Teddy Creque, and his wholly authentic domain, the Virgin Islands."