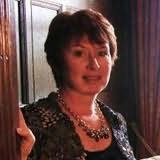 Lindsay has four children and lives in Borth on the West Wales coast. She worked as a journalist for many years and has a degree in Criminology from Cambridge University. She has written three crime novels featuring forensic psychologist Megan Rhys: Frozen, Strange Blood (longlisted for the Theakstons Crime Novel of the year), and Death Studies. She had also written a 'Quick Read' book about the same character entitled The Rubber Woman. Her short stories have been published by women's magazines including Woman's Weekly and broadcast on Radio 4.

The Road Beyond Ruin (2019)
Gemma Liviero
"Poignant, thought-provoking, and cleverly written. The characters are drawn with such sensitivity that you feel you are there with them. A brilliant book and one that I would recommend to everyone."
Visitors to this page also looked at these authors
Rhys Bowen
Fern Britton
Laurie R King
Robin Stevens
Charlotte Betts
Andrea Penrose
Ashley Weaver
Andrew Wilson
Alyssa Maxwell
Jane Ashford
Lorna Cook
Amanda Ashley
Anna Lee Huber
LeAnn Ashers
Nancy Atherton
Kelley Armstrong