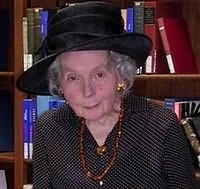 aka Diana Gordon, Joanna Marcus
Lucilla Andrews was born in Suez, the daughter of an English father and a Spanish mother. She went to school in England and wrote her first (unpublished) novel at the age of eleven. During World War II she trained as a nurse at St Thomas's Hospital in London.

Lucilla Andrews later became one of Britain's leading romantic novelists, and many of her books draw upon her own experiences of her medical background. Lucilla Andrews lived in Edinburgh during the later part of her life, and she died there in 2006, aged 86.