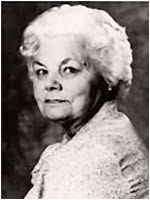 (1910 - 2001)
Betty Neels was born on September 15, 1910 in Devon to a family with firmroots in the civil service. She said she had a blissfully happy childhoodand teenage years, which stood her in good stead for the tribulations tocome with the Second World War. She was sent away to boarding school, andthen went on to train as a nurse, gaining her SRN and SCM, that is, StateRegistered Nurse and State Certificate of Midwifery.

In 1939 she was called up to the Territorial Army Nursing Service, whichlater became the Queen Alexandra Reserves, and was sent to France with theCasualty Clearing Station. This comprised eight nursing sisters, includingBetty, to 100 men! In other circumstances, she thought that might have beenquite thrilling! When France was invaded in 1940, all the nursing sistersmanaged to escape in the charge of an army major, undertaking a lengthy andterrifying journey to Boulogne in an ambulance. They were incrediblyfortunate to be put on the last hospital ship to be leaving the port ofBoulogne.But Betty's war didn't end there, for she was posted to Scotland, and thenon to Northern Ireland, where she met her Dutch husband. He was a seamanaboard a minesweeper, which was bombed. He survived and was sent to thesouth of Holland to guard the sluices. However, when they had to abandontheir post, they were told to escape if they could, and along with a smallnumber of other men, he marched into Belgium. They stole a ship and managedto get it across the Channel to Dover before being transferred to theAtlantic run on the convoys. Sadly he became ill, and that was when he wastransferred to hospital in Northern Ireland, where he met Betty. Theyeventually married, and were blessed with a daughter. They were posted toLondon, but were bombed out. As with most of the population, they made thebest of things.

When the war finally ended, she and her husband were repatriated to Holland.As his family had believed he had died when his ship went down, this was avery emotional homecoming. The small family lived in Holland for 13 years,and Betty resumed her nursing career there. When they decided to return toEngland, Betty continued her nursing and when she eventually retired she hadreached the position of night superintendent.

Betty Neels began writing almost by accident. She had retired from nursing,but her inquiring mind had no intention of vegetating, and her new careerwas born when she heard a lady in her local library bemoaning the lack ofgood romance novels. There was little in Betty's background to suggest thatshe might eventually become a much-loved novelist.

Her first book, Sister Peters in Amsterdam, was published in 1969, and bydint of often writing four books a year, she eventually completed 134 books.She was always quite firm upon the point that the Dutch doctors whofrequently appeared in her stories were *not* based upon her husband, butrather upon an amalgam of several of the doctors she met while nursing inHolland.

To her millions of fans around the world, Betty Neels epitomized romance.She was always amazed and touched that her books were so widely appreciated.She never sought plaudits and remained a very private person, but it madeher very happy to know that she brought such pleasure to so many readers,while herself gaining a quiet joy from spinning her stories. It is perhaps areflection of her upbringing in an earlier time that the men and women whopeopled her stories have a kindliness and good manners, coupled to honestyand integrity, that is not always present in our modern world. Her myriad offans found a warmth and a reassurance of a better world in her stories,along with characters who touched the heart, which is all and more than onecould ask of a romance writer. She received a great deal of fan mail, andthere was always a comment upon the fascinating places she visited in herstories. Quite often those of her fans fortunate enough to visit Holland diduse her information as an itinerary for their travels!

Betty Neels died peacefully in hospital on June 7, 2001, aged 91. Her careerwith Mills & Boon and Harlequin spanned 30 years, and she continued to writeinto her 90th year.

Omnibus
A Wife for Andrew / Bitter Masquerade / Fate Is Remarkable (1971) (with Lucy Gillen and Margery Hilton)
Winter Loving / Gemel Ring / Whispering Gate (1983) (with Janice Gray and Mary Wibberley)
Avenging Angel / Sown in the Wind / Cruise to a Wedding (1985) (with Helen Bianchin and Jean S MacLeod)
Best of Betty Neels: Britannia All at Sea, The Little Dragon (1985)
The House in the Foothills / The Short Engagement / Henrietta's Own Castle (1986) (with Mons Daveson and Marjorie Lewty)
The Little Dragon / Adair of Starlight Peaks / The Dark Warrior (1987) (with Essie Summers and Mary Wibberley)
Sister Peters in Amsterdam / Nurse in Holland / Blow Hot, Blow Cold (1989)
Two for the Heart (1994) (with Ellen James)
Christmas Miracles (1996) (with Carole Mortimer and Rebecca Winters)
Nearly Weds! (1999) (with Penny Jordan and Carole Mortimer)
Love and Marriage (1999) (with Emma Goldrick)
Mistletoe Magic (1999) (with Margaret Way and Rebecca Winters)
Mistletoe Miracles (2000) (with Catherine George and Marion Lennox)
Marrying a Doctor (2001) (with Caroline Anderson)
The Proposal / Making Sure of Sarah (2001)
The Engagement Effect (2001) (with Liz Fielding)
Not Once But Twice / A Girl Named Rose (2002)
The Most Marvellous Summer / A Summer Idyll (2002)
Only by Chance / A Happy Meeting (2002)
Tangled Autumn / The Edge of Winter (2002)
The Secret Pool / The Girl with Green Eyes (2002)
Winter of Change / A Winter Love Story (2002)
Sun and Candlelight / A Star Looks Down (2003)
Matilda's Wedding / An Innocent Bride (2003)
Dearest Mary Jane / Romantic Encounter (2003)
Last April Fair / The Course of True Love (2003)
The Promise of Happiness / Caroline's Waterloo (2003)
Sister Peters in Amsterdam / Emma's Wedding (2003)
Christmas Wishes (2003)
A Christmas To Remember (2004) (with Debbie Macomber and Jessica Steele)
The Doubtful Marriage / Secret Wedding (2005) (with Liz Fielding)
All I Want for Christmas... (2005) (with Jessica Steele and Margaret Way)
Valentine Love Affairs (2006) (with Catherine George)
Christmas Treasures (2006) (with Caroline Anderson and Helen Brooks)
Betty Neels Bridal Collection (2007)
The Joy of Christmas (2007) (with Helen Brooks and Margaret Way)
Innocent Brides-To-Be (2008)
Dearest Eulalia / Doctor's Girl (2008)
Proposal / Ordinary Girl (2008)
Summer Engagements (2008)
Christmas Dreams (2008) (with Jessica Hart and Rebecca Winters)
A Convenient Marriage (2009) (with Lindsay Armstrong and Liz Fielding)
Sleigh Bells and Wedding Rings (2009) (with Jessica Hart and Debbie Macomber)
Mills & Boon Christmas Trio Bundle #2 (2010) (with Caroline Anderson, Annie Burrows, Susanne James, Debbie Macomber and Joanna Maitland)
A Very English Christmas (2010) (with Caroline Anderson and Susanne James)
The Awakened Heart / The Moon for Lavinia (2014)
Dearest Mary Jane / The Daughter of the Manor (2014)
Stars Through the Mist / All Else Confusion (2014)
Rags To Riches (2017) (with Leanne Banks, Michelle Douglas, Lynne Graham, Elizabeth Lane, Susan Meier, Emilie Rose, Chantelle Shaw, Gina Wilkins and Cathy Williams)
Rags To Riches: Her Duty To Please (2017) (with Michelle Douglas and Chantelle Shaw)
Roses for Christmas / Proposal at the Winter Ball (2017) (with Jessica Gilmore)
Winter of Change / A Matter of Chance (2018)
A Valentine for Daisy / His Reluctant Cinderella (2018) (with Jessica Gilmore)
Discovering Daisy / The Doctor's Former Fiancee (2018) (with Caro Carson)
Matilda's Wedding / A Brevia Beginning (2018) (with Michelle Major)
The Awakened Heart / The Bachelor Takes a Bride (2018) (with Brenda Harlen)
The Girl with Green Eyes / The Moon for Lavinia (2018)
Matilda's Wedding / Nanny by Chance (2018)
Pineapple Girl / The Baby Switch (2018) (with Melissa Senate)
A Girl in a Million / Saturday's Child (2018)
A Christmas Proposal / Secret Christmas Twins (2018) (with Lee Tobin McClain)
A Valentine for Daisy / The Awakened Heart (2018)
Britannia All at Sea / Her Maverick M.D. (2019) (with Teresa Southwick)
Dearest Mary Jane / Stars Through the Mist (2019)
Discovering Daisy / Off with the Old Love (2019)
A Good Wife / Britannia All at Sea (2019)
Three for a Wedding / Judith (2019)
Caroline's Waterloo / Fate Is Remarkable (2019)
The Right Kind of Girl / Pineapple Girl (2019)
Always and Forever / An Independent Woman (2019)
A Kiss for Julie / The Doubtful Marriage (2019)
A Christmas Wish / A Winter Love Story (2019)
The Mistletoe Kiss / The Vicar's Daughter (2019)
The Daughter of the Manor / A Gentle Awakening (2020)
Stormy Springtime / The Bachelor's Wedding (2020)
Dearest Love / Love Can Wait (2020)
Emma's Wedding / Marrying Mary (2020)

Kids and Kisses
A Valentine for Daisy (1993)

Holding out for a Hero
The Bachelor's Wedding (1995)