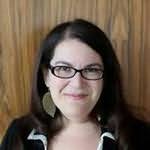 (b.1974)
Naomi Alderman is a British author and novelist. Born in in London, she was educated at South Hampstead High School and Lincoln College, Oxford where she read philosophy, politics and economics. She then went on to study creative writing at the University of East Anglia before becoming a novelist.

She was the lead writer for Perplex City at Mind Candy from 2004 through June, 2007. Her father is Geoffrey Alderman, a well-known professor of Anglo-Jewish history.