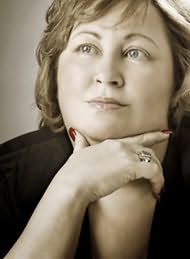 aka Kay Robbins
Kay Hooper was born in California, in an air force base hospital since her father was stationed there at the time. The family moved back to North Carolina shortly afterward, so she was raised and went to school there.
The oldest of three children, Kay has a brother two years younger and a sister seven years younger. Her father and brother are builders who own a highly respected construction company, and her mother worked for many years in personnel management before becoming Kay's personal assistant, a position she held until her untimely death in March 2002. Kay's sister Linda works as her Business Manager, Events Coordinator, and is playing a major role in the creation and operation of The Kay Hooper Foundation.
Kay Hooper is a New York Times bestselling American author of more than 60 books.

Delaneys of Killaroo
1. Adelaide, the Enchantress (1987)

The Tall Dark Alibi (1988)
Carol Jerina
"It's tough to combine romance with mystery and Carol's done it well. God, I had fun!"

You Again (1996)
Peggy Nicholson
"Impossible to put down until the final, wonderfully satisfying page is turned."

Don't Look Back (2002)
(Lavinia Lake / Tobias March, book 2)
Amanda Quick
"AMANDA QUICK delivers a heady and satisfying mix of romance and suspense. Nobody does it better!"

A Perfect Grave (2007)
(Jason Wade, book 3)
Rick Mofina
"Pushes crackling suspense to the breaking point and beyond... a must-read!"