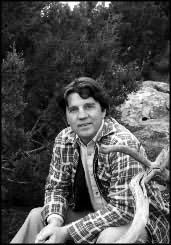 (b.1945)
He grew up in rural Cochranton, Western Pennsylvania. He attended school in a one room schoolhouse. He graduated with a B.A. in English from Grove City College in Pennsylvania. While a college student, Blackwood published his first short story, Cliffs of Gold, in Twelve/ Fifteen magazine. Blackwood's first book was The Lion and the Unicorn, which he published when he was nineteen. Blackwood sets his tale of theatrical intrigue against the backdrop of Elizabethan London in 1601. With careful attention to details of the time, the author re-creates a swashbuckling world where men duel with swords if their honor is questioned, where females disguise themselves as males if they want a life on the theater stage, and where servants do not question the word of their masters.

He has sold dozens of stories to children's magazines, and has published twenty-one novels for young adults and middle readers. Over the years, he has traveled all over the country, spreading his stories and answering the questions of young readers about his books.

Blackwood has also written half a dozen plays. His plays have been produced in regional and universities theatres.