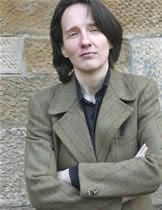 (Alison Louise Kennedy)
Scotland (b.1965)
Novelist and short-story writer A.L. Kennedy has worked for the arts and special needs charity Project Ability since 1989, first as Writer in Residence (1989-95), then as editor of Outside Lines magazine, and has been a member of the Management Committee since 1998. She was editor of New Writing Scotland (1993-5) and was Writer in Residence at Copenhagen University in 1995. She reviews for The Scotsman, the Glasgow Herald and the Daily Telegraph, is a contributor to the Guardian, and has been a judge for both the Booker Prize for Fiction (1996) and The Guardian First Book Award (2001). She was made a Fellow of the Royal Society of Arts in 2000.

Her first book, Night Geometry and the Garscadden Trains (1990), a bleak collection of short stories set in Scotland, won several awards including the Mail on Sunday/John Llewellyn Rhys Prize, a Scottish Arts Council Book Award and the Saltire Society Scottish First Book of the Year Award. In 1993 she was named as one of Granta magazine's 20 'Best of Young British Novelists 2'.

She has written numerous short story collections, So I am Glad (1995) winning the Encore Award.

She wrote the screenplay to the BFI/Channel 4 film Stella Does Tricks, released in 1998, and edited New Writing 9 (2000) with John Fowles, published in the UK by Vintage in association with the British Council. Her book of short stories, Indelible Acts, was published in 2002.

Anthologies containing stories by A L Kennedy
Crossing the Border (1998)

Fidelity (2003)
Michael Redhill
"A writer of considerable humanity and insight."

Orchid & the Wasp (2018)
Caoilinn Hughes
"Caoilinn Hughes is the real thing – an urgent, funny, painstaking and heartfelt writer. Orchid & the Wasp is a startling debut full of the moral complexity, grief and strange bewilderments of humanity. As the world spins ever more quickly in response to the demands of grifters, parasites and liars, this book offers a troubling, beautiful and wise response."

Little (2018)
Edward Carey
"'Little' is that rare thing – a unique novel with a unique and fully-realised voice, rich in deadpan wit and surgically precise observation. By turns tragic, bizarre and deeply moving Little introduces readers to a heroine like no other and a book that will truly last. It is an absolute delight."

I Will Never See the World Again (2019)
Ahmet Altan
"Read this-it will explain why you ever read anything, why anyone ever writes."

Scabby Queen (2020)
Kirstin Innes
"Kirstin Innes is aiming high, writing for readers in the early days of a better nation."