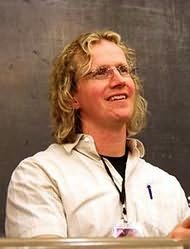 Canada (b.1967)
R Scott Bakker is a Canadian fantasy author. He grew up on a tobacco farm in the Simcoe area. In 1986 he attended the University of Western Ontario to pursue a degree in Literature and later an MA in Theory and Criticism. After nearly completing, but ultimately abandoning, a Ph.D in Philosophy at Vanderbilt University he moved to London, Ontario, where he now lives with his wife.