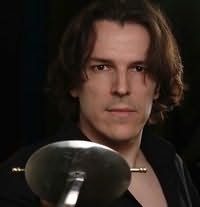 Canada
Sebastien de Castell had just finished a degree in Archaeology when he started work on his first dig. Four hours later he realized how much he actually hated archaeology and left to pursue a very focused career as a musician, ombudsman, interaction designer, fight choreographer, teacher, project manager, actor, and product strategist. His only defence against the charge of unbridled dilettantism is that he genuinely likes doing these things and that, in one way or another, each of these fields plays a role in his writing. He sternly resists the accusation of being a Renaissance Man in the hopes that more people will label him that way.

Sebastien lives in Vancouver, Canada with his lovely wife and two belligerent cats.

The Traitor Baru Cormorant (2015)
(Masquerade , book 1)
Seth Dickinson
"A new fantasy world as rich and complex as our own . . . Baru Cormorant is brilliant, bold, and very, very dangerous."

A Time of Dread (2018)
(Blood & Bone, book 1)
John Gwynne
"Fans of epic fantasy have something to cheer about: A Time of Dread is marvellous. Gwynne's writing is superb, delivering not only twists and turns but also nuance and complexity."

Foundryside (2018)
(Founders , book 1)
Robert Jackson Bennett
"An irresistible, fast-paced adventure that welcomes even non-fantasy fans into its pages, unveiling a remarkable and sophisticated world of magic and intrigue. With non-stop twists, a compelling cast of characters, and an innovative magic system, Foundryside is an altogether terrific read."