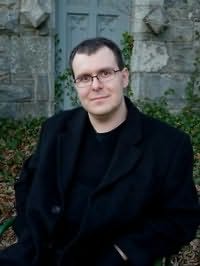 Django Wexler graduated from Carnegie Mellon University in Pittsburgh with degrees in creative writing and computer science, and worked for the university in artificial intelligence research.  Eventually he migrated to Microsoft in Seattle, where he now lives with two cats and a teetering mountain of books.  When not planning Shadow Campaigns, he wrangles computers, paints tiny soldiers, and plays games of all sorts.

Senlin Ascends (2013)
(Babel, book 1)
Josiah Bancroft
"Senlin Ascends crosses the everyday strangeness and lyrical prose of Borges and Gogol with all the action and adventure of high fantasy. I loved it, and grabbed the next one as soon as I turned the last page."

The Grey Bastards (2015)
(Lot Lands, book 1)
Jonathan French
"A gritty adventure with a fantastic, foul-mouthed voice and filthy, lovable characters in a wonderfully original world. Fans of Abercrombie’s THE FIRST LAW or the soldierly banter of Erikson’s MALAZAN BOOK OF THE FALLEN will like this a lot."

The Waking Fire (2016)
(Draconis Memoria, book 1)
Anthony Ryan
"The Waking Fire is part Indiana Jones, part Pirates of the Caribbean, and part Mistborn. It's got wonderful, memorable characters and great action...I loved it."

Blackwing (2017)
(Raven's Mark, book 1)
Ed McDonald
"Blackwing is a bloody, gritty fantasy novel that manages not to sacrifice its heart. I love the world, which feel strange and lived-in, and the strength of the voice is fantastic. Fans of Glen Cook’s The Black Company or Joe Abercrombie’s The First Law series will be very happy with this one."

Black Chamber (2018)
(Alternate World War, book 1)
S M Stirling
"It's a great feeling being in the hands of an alternate history master. Black Chamber is a wonderfully fun transcontinental spy romp, and a great beginning to a new series."

Breach (2018)
(Cold War Magic, book 1)
W L Goodwater
"Breach is a Cold War fantasy that nails the period flavor of a divided Berlin haunted by the horrors of the past, with a great cast and plenty of magic. Fans of Tim Powers' Declare or Charles Stross' The Atrocity Archives will like this one!"

Children of Ruin (2019)
(Children of Time, book 2)
Adrian Tchaikovsky
"Children of Ruin is wonderful - big, thinky SF that feels classic without being mired in the past, absolutely crammed with fun ideas. Anyone who likes sweeping, evolutionary-scale stories will love this."

Wanderers (2019)
Chuck Wendig
"Wanderers is amazing—huge, current, both broad and intensely personal, blending the contemplative apocalypse of Station Eleven with the compulsive readability of the best thrillers."

Novice Dragoneer (2019)
(Dragoneer Academy, book 1)
E E Knight
"Novice Dragoneer is deep and thoughtful, with intricate worldbuilding and resonant characters both human and draconic. Anyone who fell in love with Tamora Pierce's Alanna will find a home here too."