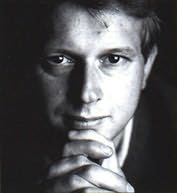 (b.1960)
Peter F. Hamilton was born in Rutland in 1960, and now lives near Rutland Water. He began writing in 1987, and sold his first short story to Fear magazine in 1988. He has also been published in Interzone and the In Dreams and New Worlds anthologies, and several small press publications.

Perdido Street Station (2000)
(New Crobuzon, book 1)
China Miéville
"China Mieville's cool style has conjured up a triumphantly macabre technoslip metropolis with a unique atmosphere of horror and fascination. A kind of imaginary world you pray stays imaginary, because we really don't need characters and stories this real finding a way to cross over."

The Hyperion Omnibus (2004)
(Hyperion)
Dan Simmons
"Sets the standard for SF in the new century."

The Black Lung Captain (2010)
(Tale of the Ketty Jay, book 2)
Chris Wooding
"The kind of old-fashioned adventure I didn't think we were allowed to write anymore..."

The Dark Between the Stars (2014)
(Saga of Shadows, book 1)
Kevin J Anderson
"Kevin J Anderson writes the kind of entertaining and inventive space opera that is exactly what i want to read. The saga of Seven Suns was a triumphant milestone in the genre. I can't wait to get started on the Saga of Shadows."

From Darkest Skies (2017)
(From Darkest Skies, book 1)
Sam Peters
"A first class SF thriller. Even though Peters wrapped up the case, I still wanted to know more about the universe of Magenta."

The Takeshi Kovacs Collection (2017)
(Takeshi Kovacs)
Richard K Morgan
"His mastery of the SF thriller has brought a well-deserved new kudos to the genre."