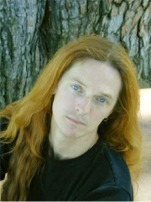 (b.1960)
Steven R. Boyett lives in Southern California and wouldn't have it any other way. Steve has been a writing teacher, editor, martial-arts instructor, and professional paper marbler, among other things. He is too modest to admit it, but he plays a mean digeridoo. His short stories have appeared in numerous magazines and anthologies, and he has also written comic books and a draft of the movie Toy Story 2.