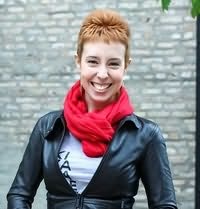 Olivia A. Cole is an author, blogger, and poet. Her work has been published in such publications as The Oregon Literary Review, The Comstock Review, The Huffington Post, The Daily Dot, xoJane, and others. She was a semi-finalist in the 2014 Gwendolyn Brooks Open Mic Awards. She published her first novel, Panther in the Hive, in April 2014 and its sequel, The Rooster's Garden, in February 2016. She signed a 2-book deal with HarperCollins Katherine Tegen Books in 2016 for a new young adult series, the first of which is due out January 2018.

Olivia grew up in Louisville, KY and lived there until she moved to Chicago in 2007, where she attended Columbia College Chicago, earning a B.A. in Cultural Studies with a minor in Poetry. She fell in love with the city of Chicago–it later became the setting for Panther in the Hive.

On social media, Olivia is @RantingOwl, where she is often as thrilled with the existence of the Internet and as she is annoyed by it. She is currently writing a YA sci-fi series, and a literary novel whose plot is a secret.

Olivia is represented by Regina Brooks of Serendipity Literary Agency.