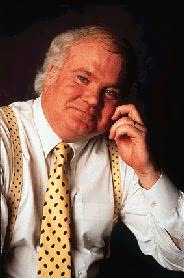 (1945 - 2016)
Contemporary southern author Pat Conroy wrote a number of highly popular books, including The Water Is Wide, The Great Santini, The Lords of Discipline, The Prince of Tides, and Beach Music. Conroy also achieved considerable success as a screenwriter. He was the author or coauthor of several Hollywood and television scripts, most notably the film adaptations of his own novels, the Prince of Tides and Beach Music.

A World Made Of Fire (1984)
Mark Childress
"A wonderful and powerful novel... a novelist of astonishing gifts."

Domestic Pleasures (1991)
Beth Gutcheon
"Few in America write as well about marriage, divorce, and the family ties which both unite and torture us all. She's in a league by herself."

The Invisible Circus (1994)
Jennifer Egan
"If there were justice in the world, no one would be allowed to write a first novel of such beauty and accomplishment."

Special Kay (2000)
Terry Kay
"The perfect writer for those who love to read."

The Florabama Ladies' Auxiliary & Sewing Circle (2001)
Lois Battle
"A magical and surprising tour of a Deep South I had no idea existed."

Prague (2002)
Arthur Phillips
"Prague is one of those rare books that help define and identify a whole generation, in the same way that Hemingway's The Sun Also Rises introduced his own lost generation."

Sweetgrass (2005)
Mary Alice Monroe
"Mary Alice Monroe is helping to redefine the beauty and magic of the Carolina Lowcountry. Every book she has written has felt like a homecoming to me."

Sweetsmoke (2008)
David Fuller
"Sweetsmoke is a fascinating and gripping novel about the Civil War. The slave, Cassius Howard, is a great fictional character, and his story is part mystery, part love story, and a harrowing portrait of slavery that reads with the immense power of the slave narratives. A tour de force for David Fuller."

Letter to My Daughter (2010)
George Bishop
"A first novel of immense power."

The Perfect Love Song (2010)
Patti Callahan Henry
"The Pefect Love Song is a lyrical and heartwarming tale of love and forgiveness."

The Tender Mercy of Roses (2011)
Anna Michaels
"An unforgettable story told with astonishing skill and clarity by a truly gifted writer."

The Winters in Bloom (2011)
Lisa Tucker
"This is one page-turner you will not want to miss."

Man in the Blue Moon (2012)
Michael Morris
"Michael Morris has been one of my favorite Southern writers. His new novel is reason for great celebration - a beautifully wrought portrayal of small-town Southern life. Buy it. Read it."

Fate Moreland's Widow (2015)
John Lane
"The literature of the southern mill village has been underdone and this magnificent novel adds greatly to it. What John Lane does better than anyone I have read is explore the interrelatedness of both the mill worker and the mill owner, trapped by the desires and abuses of unchecked power. Their symbiosis is opaque and troublesome. In the widow Novie Moreland, John has crafted a masterfully nuanced new symbol of male obsession and female resilience poised to become the Circe of the Carolina foothills."

Where It Hurts (2016)
(Gus Murphy, book 1)
Reed Farrel Coleman
"Reed Farrel Coleman's Where It Hurts tells a riveting story about a Long Island that has nothing to do with the romantic vision of F. Scott Fitzgerald in this action packed tale of an amoral world. Coleman is a born storyteller who writes with great authority and gives as much bang for the buck as the best books in the genre."