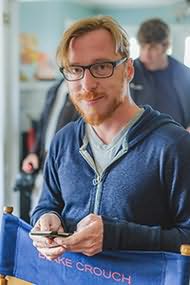 (b.1978)
Brother of Jordan Crouch
Blake Crouch is a bestselling novelist and screenwriter. He is the author of the forthcoming novel, Dark Matter, for which he is writing the screenplay for Sony Pictures. His international-bestselling Wayward Pines trilogy was adapted into a television series for FOX, executive produced by M. Night Shyamalan, that was Summer 2015s #1 show. With Chad Hodge, Crouch also created Good Behavior, the TNT television show starring Michelle Dockery based on his Letty Dobesh novellas. He has written more than a dozen novels that have been translated into over thirty languages and his short fiction has appeared in numerous publications including Ellery Queen and Alfred Hitchcock Mystery Magazine. Crouch lives in Colorado with his family.

Sick (2011)
(Project Eden , book 1)
Brett Battles
"SICK didn't just hook me. It hit me with a devastating uppercut on every primal level as a parent, a father, and a human being."

The Devil's Game (2015)
(Daniel Byrne, book 2)
Sean Chercover
"The Devil's Game is an exceptional read. Explosive and gripping, you'll get blisters on your fingers from flipping the pages to find out what happens next. This is everything you want in a conspiracy-driven thriller, and some of the smoothest writing you'll ever hope to read."

Stay (2015)
Victor Gischler
"Stay is a master class on the suburban thriller."

The Last Girl (2016)
(Dominion Trilogy , book 1)
Joe Hart
"What if there were only 1,000 women left on the planet? This is the conceit of The Last Girl, and it’s the kind of premise I live for. Part Children of Men, part The Count of Monte Cristo for the modern age, Joe Hart has written a rapturous, thought-provoking, impossible-to-put-down thriller that is destined to become the first BIG BOOK of 2016."

Sleeping Giants (2016)
(Themis Files, book 1)
Sylvain Neuvel
"First-time novelist Sylvain Neuvel does a bold, splashy cannonball off the high dive with Sleeping Giants. It bursts at the seams with big ideas and the questions they spawn—How much human life is worth sacrificing in the pursuit of scientific progress? Can humanity be trusted with weapons of ultimate destruction? And the biggest: Are we alone? But all that really matters is that this book is a sheer blast from start to finish. I haven’t had this much fun reading in ages."

The Ridge (2017)
John Rector
"The Ridge is a creeping, pitch-black window into a suburban America like nothing you’ve ever read."

Bonfire (2017)
Krysten Ritter
"Bonfire is a stone-cold stunner - the writing is dazzling, the suspense is creeping, and the story of a woman returning home to face her past is brimming with emotion and truth. An extraordinary debut from a major talent."

The Wolves of Winter (2018)
Tyrell Johnson
"If Jack London had written a post-apocalyptic, coming-of-age thriller, it might read something like this. It deserves the widest possible audience."

Golden State (2019)
Ben H Winters
"Golden State is a prescient, devastating commentary on humanity’s disintegrating attachment to reality and truth, expertly told through the prism of a police-procedural, dystopian nightmare. Winters has written a 1984 for the 21st century. Not just a thrilling book, but an important one."

That Left Turn at Albuquerque (2020)
Scott Phillips
"Many writers bill themselves as noir, but if you want to experience what the word truly means, in its finest expression, then pick up That Left Turn at Albuquerque, a brutally funny, wickedly clever nightmare that heralds the triumphant return of Scott Phillips, the twenty-first century's greatest purveyor of crime fiction."

Chosen Ones (2020)
Veronica Roth
"With Chosen Ones, Veronica Roth has pulled off a virtuoso performance, conjuring a stunning thriller/fantasy/sci-fi chimera like nothing I’ve read before, a story of ex-heroes struggling with the trauma of their past, what it means to have once saved the world, and the dark side of destiny."

Devolution (2020)
Max Brooks
"Devolution is one of the greatest horror novels I’ve ever read. The characters soar, the ideas sing, and it’s all going to scare the living daylights out of you."