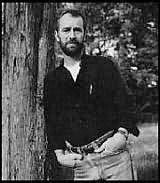 (1951 - 2004)
Larry Brown was an American writer who was born and lived in Oxford, Mississippi. Brown wrote fiction and nonfiction. He graduated from high school in Oxford but did not go to college. Many years later, he took a creative writing class from the Mississippi novelist Ellen Douglas. Brown served in the United States Marine Corps from 1970 to 1972. On his return to Oxford, he worked at a small stove company before joining the city fire department. An avid reader, Brown began writing in his spare time while he worked as a firefighter in Oxford in 1980.

Brown was awarded the Mississippi Institute of Arts and Letters award for fiction. Brown was the first two-time winner of the Southern Book Award for Fiction, which he won in 1992 for his novel, Joe and again in 1997 for his novel Father and Son. In 1998, he received a Lila Wallace-Readers Digest Award, which granted him $35,000 per year for three years to write. In 2000, the State of Mississippi granted him a Governor's Award For Excellence in the Arts. For one semester, Brown taught as a writer-in-residence in the creative writing program at the University of Mississippi, temporarily taking over the position held by his friend Barry Hannah. He later served as visiting writer at the University of Montana in Missoula. He taught briefly at other colleges throughout the United States.