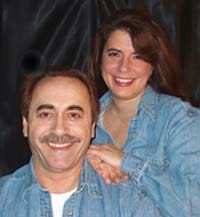 Nicknamed the dynamic duo, the husband-and-wife writing team of TonyKarayianni and Lori Schlachter began writing together in 1984, a scant tenmonths after they threw caution to the wind and shamelessly moved intogether. Twisting the old adage "Life is stranger than fiction," theydescribe their lives as being "better than fiction." While their backgroundscouldn't be more different Tony Karayianni was born in Smila near Olympia,Greece, and raised in Athens, while Lori Schlachter is a Midwestern nativeof Toledo, Ohio, U.S., they credit their successful test run and love foreach other for leading them to the altar in 1987, and point to their lovefor romance and travel for leading them to writing. They take great pleasurein constantly redefining exactly what constitutes "and they lived happilyever after" in both their writing and their personal lives. In their booksyou'll see Tony's keen eye for plotting and hunger for adventure, and Lori'slove for vivid characters and the fundamental ties that bind us all.

Under their pen name Tori Carrington, Tony and Lori hit the ground runningwith their first book for Harlequin, Constant Craving, in 1998 and they showno sign of slowing anytime soon. Their own five book miniseries, TheMagnificent McCoy Men, launched with License to Thrill, followed by thesecond book The P.I. Who Loves Her. The third book in the series is, For HerEyes Only, while the fourth is, You Only Love Once. The miniseries wraps upwith the final book, Never Say Never. Their books have been nominated forand won numerous awards. The writers point out that they'd be outrageouslyhappy if this was all that was going on in their lives, but the truth isthey have other news to share on both the personal and professional front.They're thrilled to report that they'll make their Silhouette SpecialEdition debut with their much-loved book, Just Eight Months Old..., and thatthey will be writing not one but two books for the new Sizzling series setto launch in 2001.

They also share that with these successes they'll finally be able to beginbuilding their dream vacation home on the little piece of heaven they own 35kilometers north of Athens, Greece hopefully sometime later this year. Thatis if they can find the time to oversee the arrangements!

Trueblood Texas
Every Move You Make (2002)