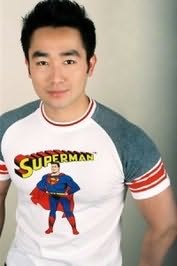 Taiwan
Wesley Chu was born in Taiwan and immigrated to Chicago, Illinois when he was just a pup. It was there he became a Kung Fu master and gymnast.

Wesley is an avid gamer and a contributing writer for the magazine Famous Monsters of Filmland. A former stunt man and a member of the Screen Actors Guild, he can also be seen in film and television playing roles such as Banzai Chef in Fred Claus and putting out Oscar worthy performances as a bank teller in Chicago Blackhawks commercials.

Besides working as an Associate Vice President at a bank, he spends his time writing and hanging out with his wife Paula Kim and their Airedale Terrier, Eva.

The Fold (2015)
Peter Clines
"A little Crichton and a little Sherlock--and sure to please fans of both."

The Desert Prince (2020)
Peter V Brett
"The Desert Prince is a deeply intimate, yet epic adventure. Heart-wrenching, smart, and modern, this book kept me wide-eyed and wide awake for many-a-nights as I struggled step-for-step alongside Olive and Darin from the green lands to the desert pits to the darkest recesses of the demon minds. The Desert Prince has set a new standard for fantasy."