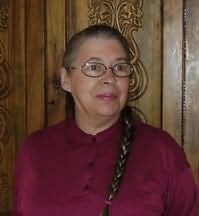 VirginiaDeMarce was born in Missouri andlives in Arlington, VA.She is retired from the federal government, where she was a historian for theOffice of Federal Acknowledgment.
Shereceived a Ph.D. in early modern history from Stanford University in 1967, which is lessobsolete than would be the case had she been in a scientific field ofendeavor. She proved unsuited to an academic career, although she taughtat the college level for fifteen years, since she was plagued by anirresistible desire to know more and more about more and more, rather thanabout less and less.
Her mostpersistent hobby is genealogy. In 1988-1989, she served as president ofthe National Genealogical Society.