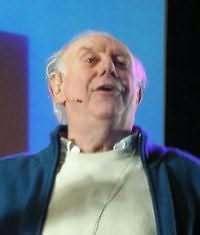 Italy (1926 - 2016)
Dario Fo was an Italian satirist, playwright, theater director, actor, and composer. He received the Nobel Prize for Literature in 1997 and in 2007 he was ranked Joint Seventh with Stephen Hawking in The Telegraph's list of 100 greatest living geniuses. His dramatic work employs comedic methods of the ancient Italian commedia dell'arte, a theatrical style popular with the proletarian classes.
Novels
Francis, The Holy Jester (2009)
The Pope's Daughter (2015)

Margherita Dolce Vita (2006)
Stefano Benni
"Read this book, bring it to life in the theater of your own imagination. You'll hold your breath as you read it, that is when you're not laughing out loud."