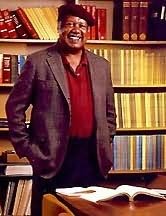 (1933 - 2019)
Born to a sharecropping family, Ernest Gaines was picking cotton in the fields by age nine and only attended school five or six months a year. When he was fifteen, he moved to California to join his mother who had relocated during World War II, and began writing. He attended San Francisco State University, served in the army, and won a writing fellowship to Stanford University. Gaines has been a MacArthur Foundation fellow, inducted into the American Academy of Arts and Letters, awarded the National Humanities Medal, and inducted into the French Order of Arts and Letters as a Chevalier.
Novels
Catherine Carmier (1964)
Of Love and Dust (1968)
The Autobiography of Miss Jane Pittman (1971)
A Long Day in November (1971)
In My Father's House (1978)
A Gathering of Old Men (1983)
A Lesson Before Dying (1993)
The Tragedy of Brady Sims (2017)