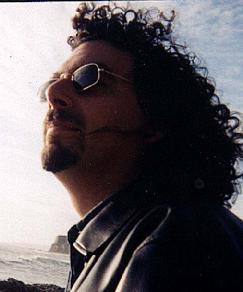 aka Nicholas Randers, Marsena Shane
Nicholas Grabowsky's novels of horror/fantasy, both as himself and as Nicholas Randers, have generated worldwide acclaim for over two decades and praised by many of today's most popular horror gurus in the literary world. He began his career in traditional publishing houses with a series of brisk sellers in mass market paperback horror, and the last ten years have seen him hailed by many as a mentor and advocate to the smaller presses, which has become to him a passion.

He's a veteran special guest at numerous genre conventions including Fangoria, Horrorfind, and the World Horror Convention, and makes appearances and signings across the United States. He has been, in the limelight as a radical gospel preacher right out of high school and in the following years a rock vocalist, teacher, lecturer and activist, editor, publisher and founder of the Sacramento-based Diverse Media small press, which has recently blossomed into the subdivisions of Black Bed Sheet Press, which publishes local talent, and Black Bed Sheet Productions, which produces independent film. Currently, Nicholas is at work with numerous anthologies, graphic novels and comic books. His independent film projects include the upcoming slasher creature feature Cutting Edges, as well as co-writing the independent film Into the Basement, for Triad Pictures. For more on the author and his works, visit www.downwarden.com, the official site of all things Grabowsky.

Anthologies edited
From the Shadows (2008)