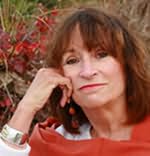 Anne D. LeClaire is the author of eight novels, including the critically acclaimed Entering Normal and The Lavender Hour, and her work has been published in twenty-four countries. She is a former reporter, radio news broadcaster, and newspaper columnist whose work has appeared in publications such as Redbook, the Boston Globe, and the New York Times. She lives on Cape Cod, Massachusetts.

Non fiction
Listening Below the Noise (2009)