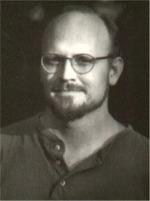 (b.1959)
Besides short fiction, Howard V. Hendrix is the author of four novels published by Ace Science Fiction: Lightpaths (1997), Standing Wave (1998), Better Angels (1999) and Empty Cities of the Full Moon. The first three continue, elaborate on, and steal from his short fiction, but the fourth comes entirely out of an as yet unexplained parallel dimension. Hendrix holds a BS in Biology as well as MA and PhD in English literature, which means he is at times able to manage fish hatcheries or teach literature classes at the nearby state university. He and his wife Laurel go for long backpacking trips in the Sierra Nevada Mountains every summer, which is their avowedly masochistic idea of fun.