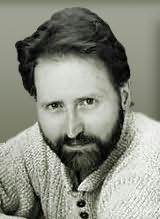 (b.1950)
Michael Reaves is a screenwriter who has written, story-edited, and/or produced hundreds of teleplays for various television series, including Star Trek: The Next Generation, The Twilight Zone, Sliders, and Monsters. He was also a story editor and writer on Batman: The Animated Series, for which he won an Emmy Award for writing in 1993. He has worked for Spielberg's DreamWorks, among other studios, and is the author of several fantasy novels and supernatural thrillers. He is also the author of Hell on Earth, and, along with John Pelan, edited the Shadows Over Baker Street anthology (Del Rey, 09/03). Michael Reaves makes his home in Los Angeles.

Chronicles of Eilandia (with Steve Perry)
The Dreadnaught (2011)

Series contributed to
Time Machine (with Steve Perry)
3. Sword of the Samurai (1984)

Batman (with Steven-Elliot Altman)
Fear Itself (2007)