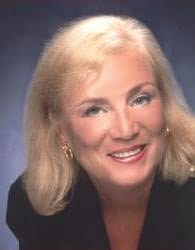 Jacqueline Baird was born on the 1st of April at home in a small village in Northumbria, the Border County of England. Jackie (to everyone except for mum) has always been an avid reader (torch under the bedcover typeas a child) and she had her first success as a writer at the age of 11, whenshe won the first prize in the Nature Diary of the year competition atschool. But she always felt a little guilty, as her diary was more fiction than fact.

Jackie met her husband Jim, when she was eighteen and after a few adventures when she traveled around the world they finally married eight years later.They had two sons, who were raised in Northumbria.

Her mother taught Jackie to believe she could do anything she tried. She has always loved romance novels, exotic men in exotic places, and when her boys were at school all day she thought she would try writing one. She says: "My first novel Dark Desiring was published in 1988, and it was the greatest thrill of my life when I held the book in my hands, family excepted. There is history as they say." She has received the Romantic Times Reviewers Choice Award in 1998, the Best Harlequin Presents and the Romantic Times Wishes, she also has appeared on numerous Walden books Series Best-seller List and on numerous British Best-seller List.

When Jackie is not busy writing she likes to spend her time traveling,reading and playing cards. She enjoys swimming in the sea when the weather allows. But a knee injury has put paid to her sailing days. With a more sedentary lifestyle, she does visit a gym three times a week and has made the surprising discovery that she gets some of her best ideas while doing mind-numbingly boring exercises on the weight machines and air walker.Jackie continued to live with her husband Jim and their two grown sons in her native Northumbria.

Passion
A Most Passionate Revenge (2000)

Modern-Day Knights
At the Spaniard's Pleasure (2003)