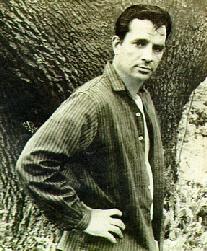 (1922 - 1969)
Jack Kerouac was born in 1922 in Lowell, Massachusetts, the youngest of three children in a French-Canadian family. Having left college, he joined the merchant marines and began the restless wanderings that were to continue for the greater part of his life. His first novel, The Town and the City, was published in 1950. On the Road, although written in 1951 (in a few hectic days on a scroll of newsprint), was not published until 1957 - it made him one of the most controversial and best-known writers of his time. Publication of his many other books, among them The Subterraneans, Doctor Sax and Desolation Angels, followed. Jack Kerouac died in St. Petersburg, Florida at the age of forty-seven.