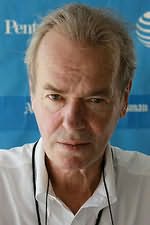 (b.1949)
Son of Kingsley Amis, husband of Isabel Fonseca
Martin Amis is an English novelist, essayist and short story writer, the son of writer Kingsley Amis. His works include such novels as London Fields (1989) and The Information (1995). Amis's raw material is what he sees as the absurdity of the postmodern condition with its grotesque caricatures. He has thus sometimes been portrayed as the undisputed master of what the New York Times has called "the new unpleasantness."

The Guardian writes that "all his critics have noted what Kingsley Amis complained of as a 'terrible compulsive vividness in his style ... that constant demonstrating of his command of English'; and it's true that the Amis-ness of Amis will be recognisable in any piece before he reaches his first full stop."

Chapbooks
The Coincidence of the Arts (1999)

Americana (1971)
Don DeLillo
"He's a writer who, once you read him, makes you want to read everything he's done."

The Embedding (1973)
Ian Watson
"Enthralling ... It gave one the sense of being led very near to the brink of profundity, even revelation."

Oswald's Tale (1995)
Norman Mailer
"Mailer has written some pretty crazy books in his time, but this isn't one of them. Like its predecessor, Harlot's Ghost, it is the performance of an author relishing the force and reach of his own acuity."

The Sea (2005)
John Banville
"He is a master, and his prose gives continuous sensual delight."

Jack Holmes and His Friend (2012)
Edmund White
"Edmund White has three voices. First there is the storyteller, relaxed, conversational, an anecdotalist, an inspired flaneur. Then there is the poet: on every page there lies in wait a metaphor of startling precision, an image that holds and reattracts the eye. And then there is the laic philosopher, who observes human life from the highest altitudes, held aloft by vast infusions of erudition and experience. In Jack Holmes and His Friend, White's trio is in frictionless accord."