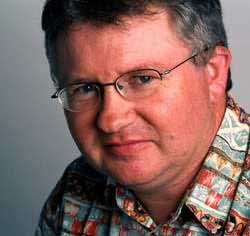 New Zealand (b.1961)
Russell Kirkpatrick is a writer, atlas maker and university lecturer. His atlas making business, Mediamerge Mapping, has led to his involvement in projects such as the New Zealand Historical Atlas (1997), Contemporary Atlas New Zealand (1999, 2004), Degrees of Deprivation (2000, 2004) and the Atlas of Bahrain (forthcoming).

Since 2000 he has lectured part-time in Geography at the University of Waikato. His speciality is social cartography; that is, mapping the human dimensions of spatial relationships. This includes such things as post-modernist and feminist cartography.

He has been writing 'epic' fantasy since 1986, and the first book in his 'Fire of Heaven' series was published by Harper-Collins in 2004. The books are to be published this year in the UK by Orbit. He is currently at work on a new series.