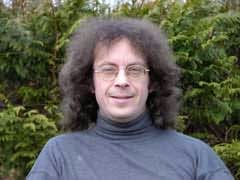 (b.1968)
Scott Mariani grew up in the historic town of St Andrews, Scotland. He studied Modern Languages and Film Studies at Oxford University and went on to work as a translator, a professional musician, a pistol shooting instructor and a freelance journalist before becoming a full-time writer. Scott had the idea for the Ben Hope character while out walking one day, and the first draft of the first novel was written in just three weeks. The book had a brief spell in hardback, selling its print run in less than two months. The Avon imprint of HarperCollins then bought the paperback rights and offered Scott a four-book deal, launching the series in earnest. Within less than a year of the initial contract being signed, Scott was commissioned to write three more Ben Hope books. Scott lives in a rambling 1830s country house in the wilds of west Wales. When he isn't writing, he enjoys jazz and archery, is a huge fan of the movies, a keen astronomy buff, and tries to find time to ride his Triumph Bonneville around the country lanes.

Covenant (2011)
(Ethan Warner, book 1)
Dean Crawford
"Earth-shattering intrigue, hyperdrive action and a desperate race to save humanity, cranked up to the max with scarily realistic science and apocalyptic religion thrown in for good measure . . . a major new talent has hit the mystery thriller scene."

Solomon Creed (2015)
(Solomon Creed, book 1)
Simon Toyne
"Intrigue, mystery, atmosphere . . . it will draw you in and hold you there. Solomon Creed is a thriller with smarts and class."