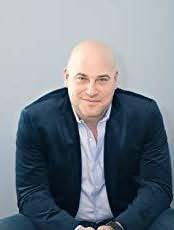 Tal M. Klein, author and musician, was born in Israel, grew up in New York, and currently lives in the Detroit area with his wife and two daughters. When she was five years old, his daughter Iris wrote a book called I'm a Bunch of Dinosaurs that went on to become one of the most successful children's book projects on Kickstarter --something that Tal explained to Iris by telling her, "your book made lots of kids happy." Iris then asked Tal, "Daddy, why don't you write a book that makes lots of grownups happy?" Tal mulled this over for a few years, and eventually wrote his first book, The Punch Escrow. It won the Inkshares Geek & Sundry Hard Science Fiction publishing contest, and was the first book published on Legendary Entertainment's Geek & Sundry imprint. The film rights for The Punch Escrow have been acquired by Lionsgate. James Bobin (Flight of The Conchords, The Muppets) has been attached to adapt and direct.
Novels
The Punch Escrow (2017)

The Late Bloomer (2018)
Mark Falkin
"Like a sharp, winding staircase that narrows as it turns, the claustrophobic world of The Late Bloomer hems the reader in page by page."