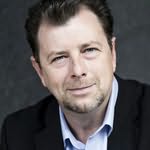 aka C F Iggulden
Conn Iggulden taught English for seven years before becoming a full-time writer. He is married with four children and lives in Hertfordshire, England.

In the Name of the King (2011)
(Andre de Roland, book 2)
A L Berridge
"Bernard Cornwell meets The Three Musketeers."

Dodger (2013)
(Dodger , book 1)
James Benmore
"Dickens would have loved this ... a brilliant character, as lively and funny as the original Artful Dodger."

The Eagle's Vengeance (2013)
(Empire , book 6)
Anthony Riches
"Some authors are better historians than they are storytellers. Anthony Riches is brilliant at both."

Traitor's Blade (2014)
(Greatcoats, book 1)
Sebastien De Castell
"This is one hell of a good book. So many fantasies concentrate on the darkness in humanity these days. There's something to be said for that, if it's well done. Yet this is a book that reminds you that deep down, we want to have courage and honour - and we admire those who do. Hugely enjoyable throughout. 5 stars."

Gallow (2014)
(Fateguard Trilogy)
Nathan Hawke
"Shades of David Gemmell...It's about time someone good took up the tourch for heroic fantasy. Inspiring characters, great plot and culture. I read this in one session, uttely absorbed."

The Battle of All the Ages (2014)
(Matthew Quinton Journals, book 5)
J D Davies
"Hornblower, Aubrey and Quinton-a pantheon of the best adventures at sea!"

Oswiu: King of Kings (2016)
(Northumbrian Thrones, book 3)
Edoardo Albert
"Edoardo Albert's book is brilliant: hugely enjoyable, a galloping plot with characters I care about--exactly the sort of thing I love to read. . . This was a joy to read from start to finish."

First of the Tudors (2016)
Joanna Hickson
"A great tale... the golden thread that led to the crown of England."