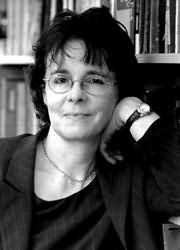 (b.1946)
Sue Limb is a British writer and broadcaster. She studied Elizabethan lyric poetry at Cambridge and then trained in education. She has not taught since 1982 - at London's Pentonville Prison. She lives on an organic farm near Nailsworth, Gloucestershire.

She is the co-author of a biography of Antarctic explorer Captain Titus Oates. Her work includes about novels - many of them for young adults - a sitcom for ITV television and BBC Radio 4, Up the Garden Path. For Radio 4, she has written a number of comedy series :The Wordsmiths at Gorsemere (two series), The Sit-Crom, Four Joneses and a Jenkins and Alison and Maud - and Growing Pains, a documentary about ageing, Hilaire Belloc and Cities (six programmes of literary anthology).

Under the name Dulcie Domum, Limb wrote Bad Housekeeping, a humorous weekly column in The Guardian's Guardian Weekend section between 1988 and 2001. Collections of the columns, a feminist novelist's diaries of a rural idyll gone wrong, were republished in book form. The books, reissued by Solidus Press in 2002, are listed below. In 1989, as Domum, Limb coined the term "bonkbuster", a play on "blockbuster" and the verb "to bonk", a British slang term for sexual intercourse. In 2002 the Oxford English Dictionary recognized this word for the first time, defining it as "a type of popular novel characterized by frequent explicit sexual encounters between the characters." Said Limb of the honor, "It's an unexpected event. People keep telling me I've made my place in history, so I can die happily now."