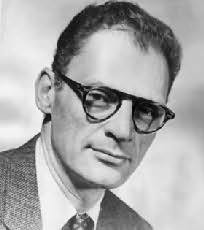 (1915 - 2005)
Arthur Miller was born in Harlem, New York City; the family moved shortly afterwards to a six-storey building at 45110th Street between Lenox and Fifth Avenues. His father, Isidore Miller, was an illiterate Jewish immigrant from Poland. His succesfull ladies-wear manufacturer and shopkeeper was ruined in the depression. Augusta Barnett, Miller's mother, was born in New York, but her father came from the same Polish town as the Millers.

After graduating from a high school in 1932, Miller worked in automobile parts warehouse to earn money for college. Having read Dostoevsky's novel The Brothers Karamazov Miller decided to become a writer. To study journalism he entered the University of Michigan in 1934, where he won awards for playwriting - one of the other awarded playwright was Tennessee Williams.
Novels
Focus (1945)