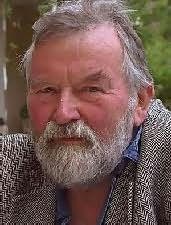 (1926 - 2005)
John Fowles was born in 1926. His books include The Collector, The Aristos, The French Lieutenant's Woman, The Ebony Tower, Daniel Martin, Mantissa, A Maggot and Wormholes. He lives in Lyme Regis.

Figures in a Landscape (1969)
Barry England
"A brilliant tour de force in the Kafka tradition."

A Dream of Wessex (1977)
Christopher Priest
"I can best convey its quality by saying that I think not only H. G. Wells but Hardy himself would have enjoyed and approved of it."

Foreign Affairs (1984)
Alison Lurie
"There is no American writer I have read with more constant pleasure and sympathy. . . . Foreign Affairs earns the same shelf as Henry James and Edith Wharton."

The News from Ireland (1986)
William Trevor
"One of the finest writers in England today."

The Chymical Wedding (1989)
Lindsay Clarke
"Lindsay Clarke's novel excited me more than any other English fiction for some time."

Jigsaw (1989)
Sybille Bedford
"A deliciously evoked return to worlds, and a Europe, now almost vanished; it will ravish connoisseurs of the lost."