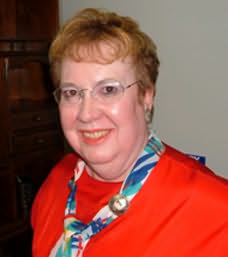 (b.1944)
D. R. Meredith, Doris to friends and family, has a split personality-one is that of a conservatively dressed legal secretary at her husband Mike's law firm. At night she turns into Mrs. Hyde dressed in jeans, flip-flops, and Texas Rangers' tee shirt and commits bloody murder. She is now in double digits. In her fourth book in the Megan Clark mystery series, the 18th book of her career, D. R. Meredith has just committed her 35th murder. "I usually average 2 murders a book, because one murder in a closed circle of suspects usually leads to another in the accepted Agatha Christie fashion. In TOME OF DEATH there are two murders, but they occur 150 years apart. I like linking the past and present and exploring the effect our past has on our present. I can't tell how I use the past without giving a broad hint to the killer's identity, but I will say that human beings don't change over time except in dress and customs. My Comanche warrior amateur sleuth isn't all that different in emotional feelings from modern paleopathologist Megan Clark, except Megan isn't into scalping."

Both Meredith's personalities live in Amarillo, Texas, with her husband and two dogs, both of whom appear in her books.