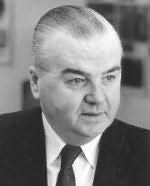 aka Albert Avellano, Jaime Sandaval
Dan J. Marlowe was born in Lowell, Massachusetts. His mother died when he was young and he was raised by two aunts. After graduating from the Bentley School of Accounting and Finance, he worked as a County Club assistant manager and a timekeeper. For twelve years, he was the office and credit manager for a tobacco wholesaler and during this time was also was a professional gambler. When his wife died from pancreatitis in 1956, he left his life in Washington D.C., moved to New York City and started to write, publishing his first novel two years later. From 1962 on, his novels profited from the expertise of professional bank robber, Al Nussbaum. While on the run, Nussbaum, impressed by Marlowe's novel, The Name of the Game is Death - featuring a bank robber - started a correspondence with him which continued after Nussbaum's apprehension; 14 years later, Marlowe helped him get paroled. Marlowe served as city councilman and mayor pro tem of Harbor Beach, Michigan. In 1977, he was struck by a mysterious amnesia that was never fully explained. He apparently lost most of his memory of his past, but retained his writing ability. He moved in with Nussbaum, who had been paroled recently and had become a writer himself, in Los Angeles, and they collaborated on short stories as they had earlier. Marlowe managed to write several sport-themed young adult books before he died in Tarzana of heart failure.