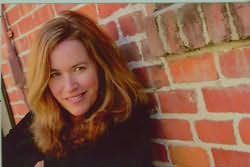 Elizabeth McKenzie is the author of The Portable Veblen, forthcoming from Penguin in 2016. Her collection, Stop That Girl, was short-listed for The Story Prize, and her novel MacGregor Tells the World was a Chicago Tribune, San Francisco Chronicle and Library Journal Best Book of the year. Her work has appeared in The New Yorker, The Atlantic Monthly, Best American Nonrequired Reading, and the Pushcart Prize Anthology, and recorded for NPR's Selected Shorts.
Novels
Stop That Girl (2005)
MacGregor Tells the World (2007)
The Portable Veblen (2016)

Touch (2017)
Courtney Maum
"Touch is so smart that even its comic absurdities quiver with wisdom, as an anti-mom and a neo-sensualist confirm our suspicion that the lives of trendsetters aren’t quite what they appear to be. Maum’s writing is sharp and complex - prepare to be touched by this novel is ways you might not expect."

Gork, the Teenage Dragon (2017)
Gabe Hudson
"Gork’s no Puff, frolicking in some 'autumn mist' or whatever. Gork’s one badass outer space dragon. His secret weapon? Poetry! Gork’s got it going on. This wonderful, big-hearted, crazy novel is a testament to Gabe Hudson’s ingenious imagination."

The Removes (2018)
Tatjana Soli
"The Removes is as beautiful a novel as I’ve read in some time. It tells of the nearly unimaginable brutality of western expansion through the stories of two women living in diverse captivities: Libbie, wife of philandering General Custer, and Anne, captured as a girl by the Cheyenne. Tatjana Soli’s writing is spare, lyrical, haunting, and heartbreaking, and countless images from this book will stay with me forever: the harsh majesty of the plains, the 'sheer animal joy' of horses running into battle, and the bravado of Custer’s long, meandering march to his ruin."

I Am God (2019)
Giacomo Sartori
"I am God is like a mirthful dream made real by the ingenuity of Sartori’s prose and Randall’s splendidly pointed and sly translation."

The Study of Animal Languages (2019)
Lindsay Stern
"Calls to mind the sly humor of Ishiguro and Nabokov. I loved this novel."

The Gardener of Eden (2019)
David Downie
"The Gardener of Eden is a novel of great originality--lively, engaging, unexpected, sharp, and poetic. Downie is a master of the eerie and bizarre, and his character Beverley is one of the great literary creations of the century."

Oligarchy (2019)
Scarlett Thomas
"The savagery of a private girls' school in England is not to be underestimated and never to be forgotten upon reading Oligarchy, Scarlett Thomas’s scathing and brilliantly written novel of wealth and vanity run terribly amok."