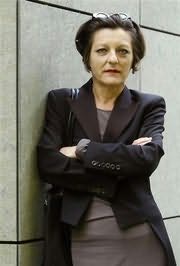 Germany (b.1953)
Herta Müller was born in Nichidorf, Timi County, Romania, the daughter of Swabian farmers. Her family was part of Romania's German minority and her mother was deported to a labour camp in the Soviet Union after World War II.

She read German studies and Romanian literature at Timioara University. In 1976, Müller began working as a translator for an engineering company, but in 1979 was dismissed for her refusal to cooperate with the Securitate, the Communist regime's secret police. Initially, she made a living by teaching kindergarten and giving private German lessons.

Her first book was published in Romania (in German) in 1982, and appeared only in a censored version, as with most publications of the time.

In 1987, Müller left for Germany with her husband, novelist Richard Wagner. Over the following years she received many lectureships at universities in Germany and abroad.

In 1995 Müller was awarded membership to the German Academy for Writing and Poetry, and other positions followed. In 1997 she withdrew from the PEN centre of Germany in protest of its merge with the former German Democratic Republic branch.

Non fiction
Cristina and Her Double (2013)