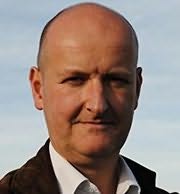 (b.1967)
Dr Ian Mortimer has been described by The Times as 'the most remarkable medieval historian of our time'. He is best known as the author of The Time Traveller's Guides: three have been completed to date, namely Medieval England (2008); Elizabethan England (2012) and Restoration Britain (2017). In addition, he has published four volumes in a sequence of historical biographies, which collectively describe the roles of the major powerbrokers in England over the period 1307 to 1415.

He also writes poetry, songs and fiction. His first three novels, the Clarenceux Trilogy, set in the 1560s, appeared under his middle names, 'James Forrester'. His latest novel, 'The Outcasts of Time', which takes place across the years 1348-1942, is published under the name Ian Mortimer.