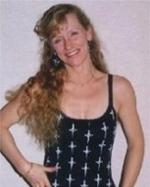 (b.1957)
Yvonne Navarro was born back when black and white photographs were considered normal instead of artsy. As a child she always thought she'd grow up to be an artist.Her first novel, AfterAge, was published in 1993 and was a finalist for the Bram Stoker Award for Superior Achievement in a First Novel. In 1995 her second solo novel, deadrush, was published, and it also was a finalist for the Bram Stoker Award, this time in the category of Superior Achievement in a novel. Final Impact, her third solo novel, was published in 1997, and won both the Chicago Women In Publishing's Award for Excellence in Adult Fiction and the "Unreal Worlds" Award for Best Horror Paperback of 1997 from the Rocky Mountain News. Since then she has published several more solo novels.

Series contributed to
Aliens (Bantam Books)
8. Music of the Spears (1996)