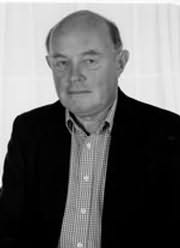 (b.1936)
John Malcolm Andrews was born in Chorlton-cum-Hardy, Manchester, in 1936. In 1945 he went with his parents to South America. After a few boyhood years in Uruguay, he returned to boarding school and university in England, where he studied engineering. He followed a career in business, travelling internationally, and management consultancy, eventually setting up as a consultant and machinery broker on his own.

He and his wife Geraldine were founder members of the Antique Collectors' Club and he wrote its first book, The Price Guide to Antique Furniture, in 1968. It has been in print in various forms ever since. He has written five reference books on antique furniture and is currently Managing Editor of Antique Collecting magazine. He was Chairman of the Trustees of Rye Art Gallery from 1995 to 2004.

As John Malcolm he produced the first of seventeen crime novels in 1984 and was Chairman of the Crime Writers' Association in 1994-1995. The Tim Simpson series of 15 novels has received consistently ethusiastic reviews. The Literary Review voted Mortal Instruments as one of the best six crime novels of 2004.

He lives in East Sussex with his wife Geraldine. They have one son, Sam, who is a journalist and publisher.