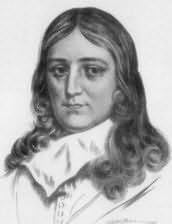 (1608 - 1674)
John Milton was an English poet, prose polemicist and civil servant for the Commonwealth of England. Best known for his epic poem Paradise Lost, Milton is also known for his treatise condemning censorship, Areopagitica.

Very soon after his death (and continuing to the present day) Milton became the subject of partisan biographies, confirming T. S. Eliot's belief that "of no other poet is it so difficult to consider the poetry simply as poetry, without our theological and political dispositions... making unlawful entry". Milton's radical, republican politics and heretical religious views, coupled with the perceived artificiality of his complicated Latinate verse, alienated Eliot and other readers; Samuel Johnson disparaged him as "an acrimonious and surly republican."