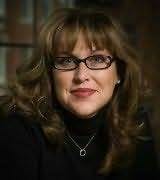 J.T. Ellison is a graduate of Randolph-Macon Woman's College and received her Master's Degree from George Washington University. She was a Presidential Appointee and worked in The White House and the Department of Commerce before moving into the private sector. As a financial analyst and marketing director, she worked for several defense and aerospace contractors.

After moving to Nashville, Ellison began research on a passion, forensics and crime. She spent a great deal of time working with the Metro Nashville Police Department, and utilized those experiences to write her debut novel, All the Pretty Girls.

The Final Seven (2016)
(Lightkeepers, book 1)
Erica Spindler
"Erica Spindler has long been an innovator, but she's created something truly special with this debut in her new thriller series, THE FINAL SEVEN. Engrossing, exciting, and genuinely scary, Spindler takes you on a relentless ride that doesn't let up until the last line. I can't wait to read the next Lightkeepers installment featuring Detectives Michaela Dare and Zach Harris - Spindler has created a partnership for the ages."

Flight of Dreams (2016)
Ariel Lawhon
"A magnificent, tour-de-force story, Flight of Dreams will break your heart and satisfy every conspiracy theorist who’s wondered what really happened to the Hindenburg. Simply spectacular. . . . Lawhon has written the book of the year. She’s a writer to watch—now, and for many years to come."

Are You Sleeping (2017)
Kathleen Barber
"If you like twisty psychological thrillers, this is your book."

Just Between Us (2017)
Rebecca Drake
"Fans of Liane Moriarty and B.A. Paris are going to love this twisty, diabolical suburban thriller. Clear your evening, you won't be able to put it down."

Somebody's Daughter (2018)
David Bell
"David Bell never disappoints. Somebody's Daughter is a stunner, full of twists and turns and duplicitous motivations. Bell's solid storytelling is as sharp and scary as ever. Fans of Harlan Coben will love this one."

Rush (2018)
Lisa Patton
"What a beautiful, haunting novel. In addition to being an engaging, lush portrait of the phenomenon known as rush, and the importance of friendships that bond women for life, RUSH tackles some social injustices lingering in the South. Lisa Patton's work personifies 'be the change.' You have to read this book, and share it with everyone you know."

Before We Were Strangers (2018)
Brenda Novak
"What a book! Before We Were Strangers is dark and compelling, an excellent thriller with heart-pounding twists, full of secrets and lies, and all too real. This is Novak at her sweet and sinister best in a story that could be happening in the house next door. Who is telling the truth? You won't know until the explosive end..."

The Stranger Inside (2019)
Laura Benedict
"Laura Benedict turns her unique voice in suspense to this elegant scary mystery, where nothing is as it seems and one woman's truth is shattered by the hidden secrets of her past."

Dear Wife (2019)
Kimberly Belle
"Subtle, insidious, clever... DEAR WIFE is spellbinding. I was hooked from the first page. You're going to love Kimberly Belle's latest outing. And you aren't going to see it coming..."

The Third to Die (2020)
(Quinn & Costa Thriller, book 1)
Allison Brennan
"Riveting, terrifying, and simply fantastic. Brennan ratchets up the tension to the breaking point with her new FBI MRT team chasing a devious killer. This is classic crime fiction at its best. With deep characterizations and a truly scary villain driving the twisted plot, this is the start of a brilliant new series from the queen of the thriller."

The Perfect Marriage (2020)
Jeneva Rose
"A book to be read in one gulp-this dastardly debut flies to a shocking reveal. I couldn't put it down; I had to see what happened. Twists galore..."

White Out (2020)
(Badlands, book 1)
Danielle Girard
"White Out is a superb thriller—intense, intricate, and so intriguing. Detective Kylie Milliard is a badass, and Girard is a one heck of a storyteller. The start of a fabulous new series."

This Secret Thing (2020)
Marybeth Mayhew Whalen
"A deeply satisfying story of secrets, scandal, and the repercussions of the decisions we make, This Secret Thing is brimming with menace and hope, and showcases Whalen’s talent for bringing her multi-layered characters to life. An impressive page-turner with heart and soul."

Sweet Water (2021)
Cara Reinard
"A remarkable tale of family loyalties and lies set in a fresh new world. Fans of Defending Jacob—both the book and the television show—will relish this sinister story of the lengths two parents will go to in order to protect their child."

Do No Harm (2021)
Christina McDonald
"Christina McDonald has a real talent for bringing suburban domestic suspense to life, and showcases it to great effect in Do No Harm. Tense, taut, and absolutely unmissable, you'll find yourself wondering how far YOU would go to save your child's life."

The Jigsaw Man (2021)
(Inspector Angelica Henley, book 1)
Nadine Matheson
"I love a good cat and mouse between a detective and a killer, and Nadine Matheson’s thriller debut The Jigsaw Man fits the bill. The relationship between DI Anjelica Henley and Peter Olivier is perfectly creepy—not to mention Olivier's freaky copycat slaughtering his way through London. From the shocking opening to the explosive ending, I couldn’t look away. The chilling storyline, intense characters, vivid prose, and unflinching crime scenes make Matheson the heir apparent to Mo Hayder and Thomas Harris. Smashing!"

The Shadow People (2021)
Joe Clifford
"The heir apparent to chandler."

Dark Roads (2021)
Chevy Stevens
"Aptly named, Dark Roads is deep, dark, and unsettling. From the opening page, it's clear you're in the hands of a master storyteller. The missing, the dead, those left behind, the ones who know what's happened, all explode onto the page. With brilliant characterizations, tight plotting, and a setting bound to give you chills, this is Steven's finest book to date. A tour de force mystery you do not want to miss."

Where I Left Her (2021)
Amber Garza
"Amber Garza's Where I Left Her taps into every parent's worst nightmare, a child gone missing, and worse, the discovery of a hidden internet world that shows they've been hiding a life from you. In this high-tension domestic drama, nothing is as it seems. Don't look away, you won't want to miss a thing!"
Visitors to this page also looked at these authors
Lisa Gardner
Allison Brennan
Catherine Coulter
James Patterson
Karin Slaughter
J A Jance
David Baldacci
Jeffery Deaver
Harlan Coben
Janet Evanovich
Iris Johansen
John Grisham
Lee Child
Nora Roberts
Michael Connelly
Tess Gerritsen