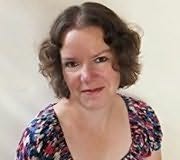 Kathleen McGurl lives in Bournemouth with her husband. She has two sons who are both now at university. She always wanted to write, and for many years was waiting until she had the time. Eventually she came to the bitter realisation that no one would pay her for a year off work to write a book, so she sat down and started to write one anyway. Since then she has published several novels with HQ and Carina UK and self-published another. She has also sold dozens of short stories to women's magazines, and written three How To books for writers. She works full time in the IT industry and when she's not writing, she's often out running, slowly.

The Witch Of Willow Hall (2018)
Hester Fox
"I was entranced by this intriguing and spellbinding novel with its messages of love and loyalty and being true to who you really are."

The Forbidden Promise (2020)
Lorna Cook
"A wonderful tale of forbidden love, full of cliffhangers that kept me reading late into the night. And it has a fabulous twist."

The Second Marriage (2020)
Gill Paul
"The novel brilliantly evokes the world of the jet-set, rich and famous of the sixties so well I felt I was living it all alongside them."