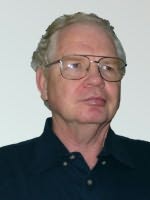 (b.1946)
Michael McCollum was born in Phoenix, Arizona, in 1946, and is a graduate of Arizona State University, where he majored in aerospace propulsion and minored in nuclear engineering. He is employed at Honeywell in Tempe, Arizona, where he is Chief Engineer in the valve product line. In his career, Mr. McCollum has worked on the precursor to the Space Shuttle Main Engine, a nuclear valve to replace the one that failed at Three Mile Island, several guided missiles, Space Station Freedom, and virtually every aircraft in production today. He is currently involved in an effort to create a joint venture company with a major Russian aerospace engine manufacturer and has traveled extensively to Russia in the last several years. In addition to his engineering, Mr. McCollum is a successful professional writer in the field of science fiction. He is the author of a dozen pieces of short fiction and has appeared in magazines such as Analog Science Fiction/Science Fact, Amazing, and Isaac Asimov's Science Fiction Magazine. Mr. McCollum is married to a lovely lady named Catherine, and has three children: Robert, Michael, and Elizabeth.

Collections
Gridlock and Other Stories (1996)